where can i get glucophage. 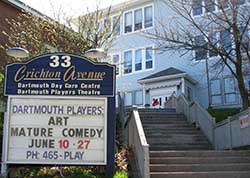 Dartmouth Players is the only community theatre in Dartmouth, Nova Scotia, and remains one of the most active volunteer-based community theatre groups in Nova Scotia. We are a registered charity and a not-for-profit organization dedicated to the creation of a viable and affordable community theatre in Dartmouth. We are a true amateur group: our members, performers, and technicians contribute and perform because they love being a part of the theatre. We produce at minimum four productions per year to an average per-play-audience of well over a thousand people and host several guest groups. Dartmouth Players has been in its location at 33 Crichton Avenue, across from picturesque Sullivans Pond, since 1987.

Although the organization in its current form has existed for 35 years, the roots of our community theatre group go as far back as 1957. Community theatre in Dartmouth got its beginnings through the Dartmouth Parks and Recreation Department when it obtained permission to use and equip the Prince Arthur Junior High School Auditorium as a community theatre. Around 1958, the Dartmouth Drama Club was formed following a meeting at Southdale School. During the 1961/62 season, the Group hosted two festivals: the Provincial One-Act Play Festival and the Regional Dominion Drama Festival.

Over the next several years, directors such as Rosa Atkinson, John Poulton, Arthur Ware, Robert Vandekieft, Cliff Tyner, and Flo Trillo directed plays in both Prince Arthur and Prince Andrew High School auditoriums. The Group took part in many of the Nova Scotia Drama League’s festivals such as in Truro (1970), and the Dominion Drama Festival (1971 and 1973). The group changed its name to “Dartmouth Players” in about 1971 and in early 1974 DP moved to the converted Dundas Cinema in Dartmouth. In the spring of 1974, Dark of the Moon, directed by Flo Trillo, was the only play produced in the Dundas Street Theatre as it burned down later that year. Since they had lost everything in the fire, the Players were unable to continue and disbanded.

Cliff Tyner and Arthur Ware were approached by Dartmouth City Council in 1985, following a Dartmouth-based production presented in the Dunn Theatre in Halifax and witnessed by then Mayor of Dartmouth, John Savage. Dr. Savage recognized the need for community theatre, and Tyner and Ware were given the use of a small room in Findlay Community Centre, where the inaugural meeting of the newly revived Dartmouth Players took place in January 1986. Plays were staged at the Dartmouth High School, Prince Andrew High School auditoriums, and the Findlay Centre until the Crichton Avenue Community Centre opened in the fall of 1987. The Centre became the settled home of the group, and over the next thirty-plus years, Dartmouth Players has produced well over sixty plays and hosted many visiting theatre groups. Our audience has grown continually during that time to reach well over five thousand people a season. We hope to see you at the theatre and enjoy the show!